Loctite 242 and 243 are two of the most popular Loctite products and that’s saying something – they have hundreds of different products to choose from. However, there’s a reason that these two products are their most popular – they’re threadlockers, which are some of the most commonly needed adhesives amongst mechanics.

I say that there’s not a lot of different between the two products, and that’s entirely true – you’re unlikely to notice much of a difference if you haven’t used these products before. But, there is definitely a difference between the two products and if you’re using Loctite 242, then I’m going to convince you of a couple of reasons that you should upgrade to Loctite 243.

There’s no doubt that Loctite 243 is a better option than 242 – Loctite themselves have even said that it’s the upgraded version. But for the majority of people, they won’t upgrade to 243 if they’ve already purchased 242 – why waste the extra cash, it’s basically the same right? Well it’s similar, but it is a bit better and it undoubtedly makes things easier.

However, the difference between the two is really minimal and you’re unlikely to notice much of a difference. I usually pick up Loctite 242 from Amazon if I’m going to purchase it, as it’s the easiest way to get my hands on it – it’s usually only $5 or so. 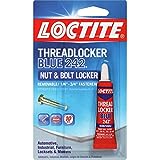 Lets see why 243 is a better choice for you than going for Loctite 242.

These are the main reasons that I prefer to use 243 instead of 242 – plus, Loctite 243 isn’t particularly expensive either, so you don’t need to worry about the cost aspect of it (I know all the different adhesives can add up!).

Other Loctite Threadlockers I recommend

There are a ton of other Loctite products out there, but I mainly use their threadlockers (like the majority of people, I guess. So, I think I’m in a good position to talk about the best Loctite threadlockers that are currently on the market and to help you understand the differences between them

If you need something with a medium viscosity which can be used for relatively high strength applications, then Loctite 272 is a better bet for you – its designed to be used for permanent thread locking, so you know it’s going to be high strength.

Wicking threadlockers can be confusing, but generally they’re designed to be extremely low viscosity so that the threadlocker itself can be applied without needing to disassemble anything (it seeps through into the thread). Loctite 290 is available to check out on Amazon here.

There are other Loctite Threadlockers out there, and there’s hundreds of different Loctite products overall, but it’s literally impossible to compare them and show you all of them. Plus, I’d be being a bit sneaky if I recommended products I haven’t used myself – I’ve used all of these products and can attest that they work well!

No matter what you need, it’s worth consider using a Loctite brand threadlocker for best effect – you can also consider using Permatex – Loctite’s biggest competitor, which I wrote a comparison about here. Though, my gut instinct will always to be to reach for the Loctite before anything else!

link to How Long Does Wood Glue Take to Dry?

If you are a woodwork enthusiast then chances are you have wondered how long wood glue takes to dry. After all, nothing kills the rhythm and fun as much as having to sit and wait for some glue to...

While super glue is undoubtedly the household champion when it comes to fixing just about anything, one of the most common questions when it comes to it is just how permanent it is. In theory...